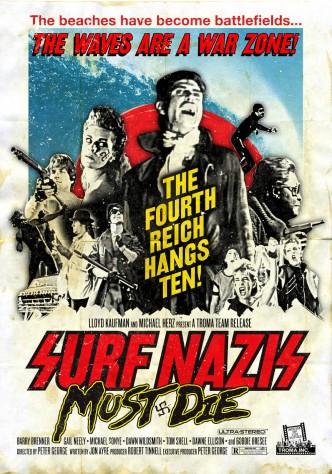 This movie blows in pretty much every sense of the of the word. Not that that comes as a surprise to anyone. I recently saw it listed as the 9,328th best movie out of 9,331 movies made in America if that gives you any indication. Which leads me to my first question. Why do I own two copies of this movie? I own the original and the directors cut. Why did I buy it a second time? I don't even remember doing that!

If I could I would rename this movie "Peter George's Diary of a Mad Black Woman" My reason for doing so is as follows. Nothing happens that's worth your time in this movie except the last 5 minutes when Gail Neely becomes a one woman wrecking crew. She's my kind of lady. Hmm I think I'll throw a grenade next to someone's head while they're sleeping. That'll wake em' up. Hmm I think I'll hold a gun to a guy's head and make him drive his boat over the surf nazis. Ok, sounds reasonable. Just your average Monday.

The worst part of this movie has to be the awful music. It's like having a masochistic 9 year old step son who hits the same five buttons on a sound board all day. If I were to sell this movie today I'd include a free "I survived the Surf Nazis" t-shirt with every copy.

There really isn't much else to say about this movie. It's retarded, and it will stunt your growth as a person, forever. Damn. Why do I own two copies of this?